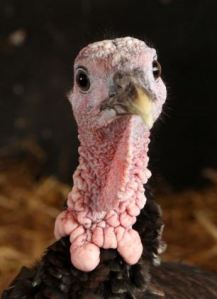 With Thanksgiving behind us and Christmas ahead, it’s the time of the year when turkeys become the centerpieces on our tables.  In most people’s minds this evokes images of family gatherings, the chatter of children, the smell of roasted meat wafting through the house. But our succulent turkey roast could have some quite unexpected consequences, far beyond this season. Antibiotic resistance.

Recently a good friend of mine had to spend a month in hospital. It wouldn’t be so shocking if it hadn’t just been a simple tooth infection that landed him there – owing to an antibiotic resistant bacterium. It’s something we hear about on and off in the news. But if it happens to someone you know, the reality of it feels suddenly different. Besides being unable to work for a month, my friend had to endure continuous testing of various, increasing toxic antibiotics in the hope of finding one the infection may finally respond to; not too pleasant on the side effects. And what if there isn’t one? You probably don’t want to know the answer to that, but think pre-1940s.

So what does that have to do with our turkey roast? Unfortunately, a lot.

In the North America, especially the U.S., livestock receive ~ 80% of the nations’ antibiotics. The drugs are administered through feed or water – usually at very low doses. But the idea behind this is not to treat sick animals, as we may think. Not at all. It’s to promote faster growth and prevent infections that tend to occur when animals are housed in crowded, unsanitary, stressful conditions. Such as large turkey farms. When exposed to low doses of antibiotics, however, bacteria are not actually killed but become quickly accustomed, and finally resistant, to the drug.

By overusing antibiotics on industrial farms on animals reared for our food consumption, that don’t actually have any infections, we are not only making them resistant though – we are actually creating new strains of bacteria, ones we cannot get rid of again. Because there is another issue many of us are not aware of. While turkey farmers only use approved antibiotics, 40% of these are not used in human medicine – yet. Which wouldn’t be a problem except for the ability of bacteria to share genetic material amongst each other. Bacteria in meat can pass on their resistance to other bacteria in a person’s digestive tract, creating new ones that are resistant to drugs that may at some point be one of few alternatives left to treat infections. Only it won’t since, unknowingly, we have already created bacteria resistant to these drugs.

What are the alternatives?

Turkey is one of the most frequently contaminated meats. According to a recent study by the Johns Hopkins School of Public Health 77% of turkey samples collected from U.S. supermarkets tested positive for the MRSA bacteria Staphylococcus aureus – and 96% of those were resistant to at least one antimicrobial drug. But the problem is not just limited to turkey farming. A recent outbreak of antibiotic-resistant Salmonella Heidelberg has been linked to Foster Farms chicken; to date, 389 people have fallen ill from the meat since March 2013.

Unfortunately, we won’t be able to change the turkey and chicken farming industry overnight, and certainly not before this year’s holidays arrive. But over time we as consumers have to put more pressure on the industry and government to change laws and prohibit the unnecessary use of antibiotic in livestock farming to prevent indefinite hospital stays due to a simple tooth infection. Of course for that to happen the way poultry is raised has to change fundamentally first, and we have to not only reduce our own meat consumption, but also remember that these are living beings that deserve a good life and humane living conditions – just as much as any other living being does. But don’t be fooled, we aren’t there yet by far. Even on most ‘free-range’ farms, conditions are very similar, if not sometimes worse, than on ‘traditional’ poultry farms. But that’s a topic for a later post.

So this Holiday, short of preparing vegan dishes, if you want to avoid becoming the new breeding vessel for antibiotic-resistant bacteria, look out for labels like “No Antibiotics Administered” or “Raised Without Antibiotics”, especially if they are government verified as well as “Animal Welfare Approved” and “Certified Humane”, which mean that antibiotics were only used to treat sick animals. But remember, “All Natural” say nothing about how an animal was raised. Of course you could also do some research on small turkey or goose farms in your area to buy your feast – or try out a European tradition like roasted fish. No matter what you end up doing though – enjoy the Holidays!